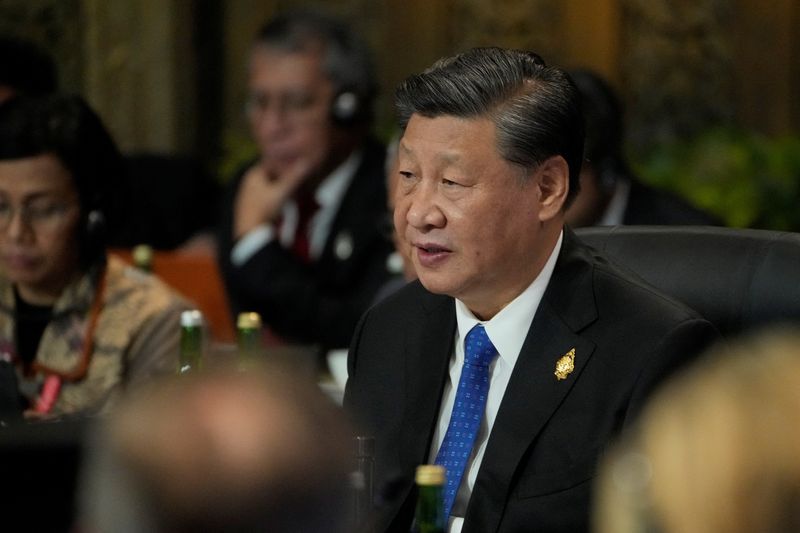 Investing.com — Whatever update to OPEC+ production policy is announced by Saudi Energy Minister Abdulaziz bin Salman today, the year-end narrative for oil might be decided by the man whose country consumes most of the commodity: China’s Xi Jinping.

From one tightening after another of his Zero-COVID policy since October, China’s president has been forced to loosen some of the hatches to the lockdowns in major Chinese cities amid widespread and rare public protests.

The oil market’s reaction to the retreat shown by the Xi administration was swift. Crude prices soared over the past week with the same urgency with which they had plunged earlier in November as traders quickly worked out the math of mobility and energy demand returning to communities that had been suppressed for months.

Yet, the rebound proved modest and fleeting. After a four-day run-up, the market turned down, closing Friday lower. New York-traded West Texas Intermediate, or WTI, still finished with a 5% gain on the week and London’s Brent with a 2% rise. But oil bulls were disappointed as that contrasted with the 19% dive in the U.S. crude benchmark and the 16% tumble in the U.K. crude gauge.

There were reasons, of course, for the dispirited performance.

Some held back support for oil on Friday to see if OPEC+ would order deeper production cuts for January. The 23-nation alliance – which represents the 13-member Saudi-led Organization of the Petroleum Exporting Countries and 10 other oil producers steered by Russia – had already announced in October a 2 million-barrels-per-day reduction that is to last through 2023. Where cuts are concerned, the more the merrier for oil bulls, and there was no certainty of that as yet on Friday.

Also weighing on sentiment was news that European Union countries had agreed to a price cap of $60 per barrel on Russian oil exports to punish Moscow over its war against Ukraine.

Crude traders had initially feared that EU countries might go for a much smaller limit of $50 a barrel or below that could sufficiently anger President Vladimir Putin and prompt him to carry out his threat of slashing Russian oil production or exports to punish Europe instead over the move. But by moving up the cap, Europe may avert any Russian retaliation – keeping Moscow’s oil supplies to the region flowing and crude prices lower.

The rebound in the from 3-½ month lows was another bearish factor for oil and most other commodities priced in the currency.

The greenback rose after data showed the United States added in November – the smallest since February 2021 but still more than 30% above market forecasts. The strong jobs number could make the Federal Reserve rethink its plan to impose smaller hereon to curb inflation when the central bank holds its monthly policy meeting on Dec. 14.

Then, there was just profit-taking by some oil traders. If the market didn’t give anything back, it could have ended the week up 10%. That’s a lot of money to leave on the table, especially when there’s no certainty of what OPEC+ would do.

But more than all these were nagging concerns about how China’s oil demand would fare if Beijing reverts to aggressive COVID action later in December and over the coming year.

“The Chinese government sold a narrative of how it successfully defeated COVID. Then, the narrative got away from it,” Jen Kirby wrote in a column that appeared in a Thursday edition of the Vox.

“That narrative has been critical for President Xi. China’s triumphalism now looks like it had serious limitations – namely that China didn’t have a real exit plan from this strict containment strategy, especially as COVID-19 evolved and, with the Omicron variants, became even more transmissible.”

The consensus among health experts and veteran China observers is that Beijing will likely loosen some of its strictest health policies and end up increasing COVID caseloads in the process. New infections from the virus hit a record high of 31,444 on Nov. 24. Some fear more dramatic spikes in a population that has a massive immunity gap for COVID compared with other nations.

And the more the COVID duress on China, the more its contagion impact on oil, say analysts who predict the country could experience a demand slide of more than 1 million barrels per day versus the norm.

“Chinese crude imports may go below 9 million barrels per day in January,” Amrita Sen, director of research at Energy…

Editor's Note: With so much market volatility, stay on top of daily news! Get caught up in minutes...

Bryan Suits, host of The Bryan Suits Show on KTTH, made sure to voice his displeasure with Washington over...

Offense Colmenarez has a smooth and sweet left-handed swing that is easy to fall in love with when everything...

Bitcoin on the Balance Sheet Is an Accounting Headache for Tesla, Others

Bitcoin Can Be The Undoing Of Inequality

What’s Going on with Gold?

ECB Preview – Phase-Out of PEPP by March as Scheduled