That’s right. Stretch it out. Thanksgiving Eve. How nice. You and I shall work this day, and I bet most of you will work on Friday as well. Easy to complain. Easier, though, if one really thinks about it, to actually feel the sense of thanksgiving that this week is supposed to be about. Already, you and I have both arisen for the day. Heck, that makes us one and oh!

There are those that won’t be so lucky. There are those that are less fortunate through no fault of their own. There are those who will not have time to spend with family or watch football (American or other) on television in some gregarious setting. They won’t have the time. They’ll be working in medical settings, keeping the streets safe, keeping certain military units at mission capable strength levels, etc.

So, yes… it is Wednesday. It is the day prior to the Thanksgiving holiday here in the US. Let us be glad, and let us give thanks. For that is the message of the day, and of the season. Let us not waste this opportunity, for those seem to run out more quickly than any of us can really be mentally or spiritually prepared for.

Tuesday seemed quiet enough. Quiet enough, that is as buy programs competed against each other, chasing equity prices higher as the real melt-up was visible at the long end of the Treasury yield curve. All as US dollar valuations eased. This put a pop in commodities for the session, with a focus on WTI Crude. I saw the US Ten Year Note paying as little as 3.75% this morning. 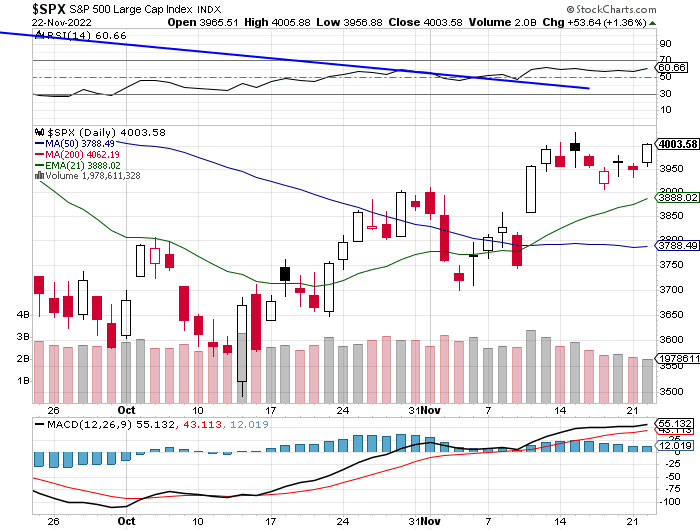 Readers will note that on this chart, the 21 day EMA crossed above the 50 day SMA on November 10th as well. This has provided some algorithmic support at these levels.

This gave traders a green light from mid to late October on to reduce cash levels and get a little more aggressive as seasonality that had been a weight earlier this Autumn, became an ally. On Tuesday, all 11 even sector-select SPDR ETFs shaded green for the day, with Energy (XLE) out in front, up 3.13%. Materials (XLB) , +2.27% finished the day in second place. These two outperformers have the already mentioned weaker dollar to thank. In fact, in a reversal from what we saw earlier this week, defensive sectors sunk to the bottom of the daily performance tables. Risk on!

Oh, and aggregate trading volumes increased slightly for the day from Monday’s levels for names domiciled at both the NYSE as well as at the Nasdaq. The streak of higher volume on “up” days and lower volume of “down” days continues.

Can we trust that tradeable bottom of mid-October? Well, that’s why we use the adjective “tradeable” when discussing that change in trend. The truth is that ultimately, we can not. While the Atlanta Fed’s GDPNow model is showing a quite robust estimate for fourth quarter GDP (+4.2%), the truth is that the Fed is still tightening policy at a time where they really need to watch carefully.

Treasury yield curves are as badly inverted as they have been…

Readers can plainly see that the 10 year/3 month yield curve, which is the more accurate tool, inverted for good in October. There is no set rule concerning the time it takes for the true onset of recession after such an event, but six months is on the short end of the range and things do tend to happen more quickly in this technological age. That puts us in late March or early April.

For more crisp and insightful business and economic news, subscribe to The Daily Upside newsletter. It's completely free and...

Oil and gas led New Mexico land use in 2022, State looks to diversify

Energy production was a leading use of New Mexico’s state-owned public land this year, with growth in fossil fuels...

Dollar Soft With Yen and Franc, Sterling Awaits Next Move

Cryptoverse: Bitcoin miners get stuck in a bear pit

What Can the ECB Do Now?